“Mitch, why don’t you come up San Jose for the launch of our new cigar line?”

Almost everything that I planned for the weekend of the launch fell through.  It was going to be a nice, romantic weekend with my girlfriend.  We were going to drive up the coast, have a wonderful Friday evening in the city, and do some sightseeing on Saturday.  Saturday evening we would go to the event, and then Sunday we would see friends and have another romantic evening in a magical city.  Monday we would take the long way home, stopping at Carmel for lunch overlooking the ocean, and make a nice, lazy, romantic day of it.

To list the ways the weekend did not go as planned would take too much time.  Suffice it to say that I drove into San Jose (alone) Saturday afternoon, and my only plans were a few business meetings Monday… and the launch event Saturday evening.

I pulled into the plaza where the lounge is located at 5:45pm, not knowing what to expect… not even knowing if it would be open yet, as the event was called for 6:00pm.  The fact that I found a parking spot in the plaza was fortuitous because the place was already jumping.  By the time it was over, the unofficial count would be 138 people in the lounge.

While the purpose of this article is to talk about the cigars, I want to take a minute to talk about the LG Cigar Lounge.  From the outside it is unassuming, nestled into the end unit of a quiet commercial plaza.  To walk into the lounge is to go back in time.  The plush leather furniture is extremely comfortable and cozy.  The large walk-in humidor is well stocked and seems to be humidified perfectly.  There is another separate room with lockers for members, which I understand is also climate-controlled.  There are cigar-themed photos on the walls, and in the back are a kitchen and the washroom.  In the front there are wooden display cabinets displaying cigar accessories ranging from desktop humidors to cutters, torches, humidification beads and shirts.  At the front there are both low tables and higher ones, each encircled with fine leather chairs.  You can as easily sit around one chatting with business associates at a low table as you could comfortably set up your laptop and papers to work at a high one.

The rear section – somewhat larger than the front – has two large screen TVs and a coffee maker, the only allowances to the modern era.  It is easy to make an espresso before you sink into a comfortable couch or chair to light your cigar and watch your football game lose to the hated rivals.  If you are of a mind to, you can even order food from your favourite restaurant (Ozhen and company ordered Italian food Sunday afternoon, and we all watched the Cowboys lose to the Patriots while enjoying calzones and cigars).  If I lived closer, this would be the kind of club I would happily be a member of.

So back to the event and cigars… I walked in Saturday evening and was handed the second of three vitolas of the new Casa de Sueños line (the first of which I smoked last week, and wrote about here).  The Toro (6×54) was just as good as the Robusto (5×50), and I enjoyed it immensely.  However the big draw at the event was their exclusive, limited edition Salomon vitola (7×56).  Several people told me that even though they were made from nearly identical recipes, they smoked very differently.  I picked one up, but would wait until the following day to enjoy it.  When I review a new cigar, I like to do so with a fresh palate.

The event was a massive success.  Everyone was having a wonderful time, and the people that I spoke with (dozens of them) were all friendly and welcoming to this outsider.  The mix of people was quite eclectic; I had in-depth conversations with policemen and firefighters, a couple of Marines, and the president of a Rolls Royce owners club.  There were people in dark suits and in red sweatpants, and women in fancy dresses as well as comfortable outfits.  I wouldn’t swear by it, but a couple of the guests might have been professional athletes.  At least two other cigar lounges were represented by their owners, and I know at least four states as well as different regions of California (as well as a couple of ex-pats from Canada and the UK) were represented.  It didn’t matter who you were or where you were from, everyone was nice and friendly and open and welcoming.  A good time was had by all!  The owners of the new cigar line (Ozhen, Chris, Kerry, and Patrick) welcomed everyone and were the perfect hosts, and when the time was right, each gave a very moving speech – they not only welcomed everyone and thanked us all for coming, they also talked about how their journey started, and the origin story of the Casa de Sueños cigar line.  It was really a very touching presentation. 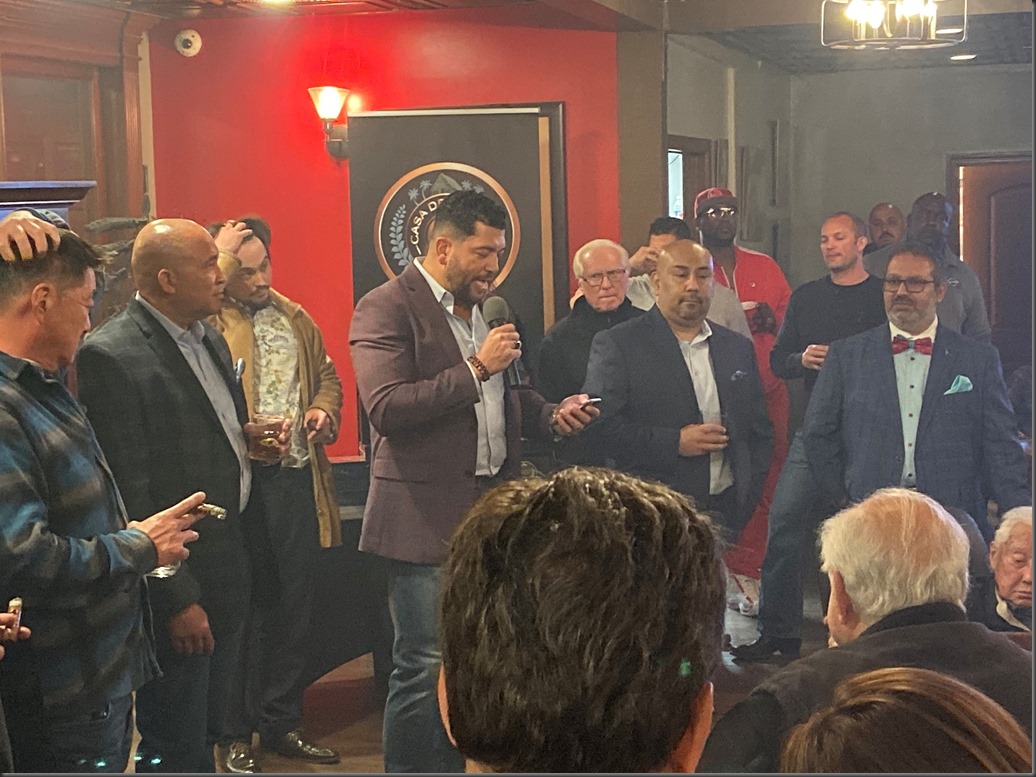 Everyone who came in was given a Casa de Sueños Toro cigar to enjoy, but they also sold dozens of boxes.  Everyone who bought a box of cigars was entered into a draw, and although I did not win the grand prize, it was still a lot of fun.

So it was not until Sunday afternoon that I sat down with a CDS Salomon, a double figuerado vitola that is 7” with a 56 ring gauge, tapered at both ends.  One of the owners defied me to find a salomon that draws as well.  I cut it with a shallow angled straight cut, my preferred cut for a figuerado.  It lit perfectly with very little effort.

The first few puffs were very creamy, reminiscent of a Cuban cigar.  It only took a few puffs (maybe 2-3mm) before I started to detect the pepper that I got off the first draws with the Robusto and the Toro, and when I did get it, it was toward the back of my tongue, which was different.  I understand why people told me last night that it was not peppery.  The first third reminded me of the identically shaped  Cuaba cigar from Habanos, with a little pepper added to the mix.  I also got hints of dried apricots, as well as fresh cedar.  The first third of the cigar paired beautifully with the Foursquare Single-Blended 2005 rum from Barbados.

True to what I was told, the draw is spectacular… as was the general construction.  As you can see from the picture, the ash was nice and light, and did not feel the least bit unstable.  The only reason I eventually rolled the ash was because I did not want it to fall on either my shirt or the floor… but when I did roll it, you could feel that it was still solid, and likely would have stayed true for much of its length.

The second third of the cigar was delightful.  Whereas the first third was more full-bodied, this part smoothed out to a lighter, creamy and delicious smoke, with hints of cinnamon and dark chocolate.  I wish I had a Speyside single-malt whisky (possibly a 2002 Glenrothes) to pair it with, but I had to satisfy my pairing with an espresso.

The third third retained the smoothness of the whole cigar, but was much stronger.  I was still detecting the cinnamon, now with a mild hint of citrus.  I couldn’t help thinking how nicely it would have paired with a Campbelltown single malt… I expect that would have complemented the citric hints.  It did pair nicely with the Weller Special Reserve bourbon that I was enjoying, but you know I prefer scotch to bourbon. 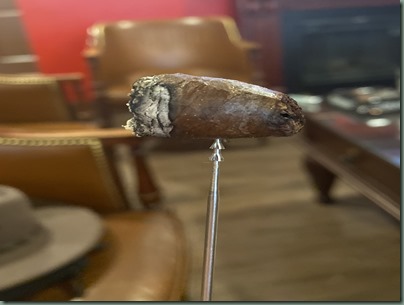 There are very few non-Cuban cigars that I consider good enough of ‘nubbing’ – a term we use to refer to using an implement such as a tooth pick to hold a cigar so you can continue smoking it when it is too hard or too hot to comfortably handle with your fingers.  The milk chocolate notes I got in the last inch and a half of the cigar made it impossible to put down.  Fortunately I have in my toolkit a Perfec Draw tool that allows me to do just that without damaging what is left of the cigar.  I was able to smoke it to within half an inch from the end, when my lips were starting to feel the fire.  It was truly that good.

At the event someone asked my opinion as to what rating I would give the Casa de Sueños cigars that I had smoked, and I did not hesitate to give it a 92 rating.  The Salomon vitola would get a bit higher than that – as high as a 94 – if I was on the review board of Cigar Aficionado (which of course I am not).  The construction, the complexity, and the taste were all spectacular, and it was a great way to spend ninety minutes on a lazy Sunday afternoon.  It gets two big thumbs up from this cigar sommelier.  The only drawback?  It is a limited release, with only fifty numbered boxes of ten cigars available per year.  My understanding is that they sold out completely in the first day, and they will not be available again until late 2020.  So when they do release them next fall, grab them as quickly as you can!

I want to take a moment to recognize Ozhen’s partner in LG Cigars, Harry, who was also in attendance at the launch event, almost a guest in his own lounge.  He was a true gentleman, and I had a few very enjoyable words with him.  My impression was that he wanted to stay in the background, leaving the spotlight to the Casa de Sueños partners and the true stars of the show, the CDS cigars.  Harry, you are a true gentleman, and it was a pleasure meeting you.  Thank you for welcoming me into your lounge.

I am a renaissance man of the IT Industry... Deployment, Virtualization, Cloud, anything about Windows client. I am also a father, a Black Belt, and a really nice guy. I am also a Certified Cigar Sommelier and cigar blogger, but I usually separate that out to my alternate site, www.passionforcigars.com. View all posts by Mitch Garvis

On board our first plane together!!
My condolences to the families of the victims of today’s explosion in Havana.
Dinner is served! Atlantic salmon fillets with Tabasco and salsa, with a side salad :)
Follow Passion For Cigars on WordPress.com
Loading Comments...
%d bloggers like this: